Today is the day, and it’s hard to believe that two years have passed already!

We’ve been so incredibly busy that the time went by way too fast!

Tomorrow we’re going on an anniversary trip, and we’re probably less prepared for this trip than any other.  As usual, the details of this trip will be kept a secret, at least until we land and begin posting.

Even after our 4 flights together (NYC, Las Vegas, Madison/Chicago, San Francisco), my girl still doesn’t like flying!  There may be no cure for her aviophobia, but at least she’ll do almost anything for an adventure!

Since we’ve been married, we’ve made two trips around the sun.

Which means we’ve already travelled about 1,168,133,746 miles at an average speed of 67,108.1 miles per hour.  The math isn’t perfect (because our orbit is elliptical), but I think the data is close enough to make a point:

We don’t need to worry so much about flying in airplanes, because we’re already travelling on a much larger scale.

As much as it makes sense to me, I know I’m still going to hold her tight during takeoff and landing (and any crazy turbulence we get along the way).  That’s OK, too!

Not only is our trip going to be very last-minute (which helps add spontaneity), but some of our other anniversary plans seem to have suffered complications as well.  I know she had at least one surprise for me that didn’t work out, and I had one for her that didn’t happen (yet).

We can still look forward to a relaxing get-away, and time to spend with each other.
There’s nothing more I could ask for.

What you can look forward to, is reading about another one of our adventures in a far-away city, full of interesting facts, and unique selfies (some of which may even make you sick).

For all those who are afraid to fly, don’t feel bad, even The Shatner is not crazy about it.

Friday was Jenny’s last day at the Gene Juarez Academy, and we combined it with our 19-month anniversary.  Normally I have a freaky obsession about posting everything in chronological order, but this is too important to wait.

There wasn’t quite enough time for me to outdo the “Prank of the Month” I pulled last year, but I had to do something special, and I love making my girl cry!  More on that in a bit.

Meanwhile Jenny “Memphis” was planning to surprise her instructors with gifts for each of them.  To do this, she enlisted the help of our friend Susan of “Red Velvet Underground” to make some of her famous custom cupcakes for the group.
This was going to be well over 40 cupcakes!

Little did she know, I had already been collaborating with Sherise Mckinney for some artwork that she wanted ever since we did the Seattle RAW show back in March.
Jenny’s favorite creature is the octopus, and Sherise had one on display that she fell in love with.
(Here’s a link to a picture of Sherise’s work, entitled “disencumber” along with the rest of that evening: Seattle RAW gallery.)

I managed to get one of the final prints of this. Keeping it a secret for a whole week wasn’t easy!  Since our anniversary was on the 2nd and her graduation was on the 5th, I thought it would work best to combine the two.

I had also planned to get her some sunflowers, as they’re her favorite. But looking at the long list of flavors that Susan had to offer, I wondered “what about an extra batch of sunflower cupcakes?”  Those weren’t on the list, but Susan still did it!

For the cupcakes (that Jenny knew about), we went to World Market and got a bunch of Chinese-takeout-style boxes. She always has the best ideas!

We had planned to include special cards with an invitation to shoot with us, and include those in each box.  But as busy as we were, and as quickly as time passed, that wasn’t going to happen. We used up almost all of our regular business cards after the Seattle RAW show, and a recent wedding we did, so we had to do something else.

At the last minute (because Costco would be closed on July 4th) we made up something to get us by, and ran off about 50 wallet-size prints.

Not nearly as cool as our regular business cards, but her picture made up for it!  With the little time we had left, this would help accomplish our shameless self-promotion.  We also grabbed a big stack of Susan’s cards, so we could put two of those on each box.

Susan delivered the cupcakes on Thursday afternoon (July 4th), along with a few extra treats for us!  If you look closely at the left picture above, you’ll see the yellow ‘sunflower’ cupcakes hiding at the bottom.  In the flurry of work going on, Jenny didn’t seem to notice, so my surprise plan was working (so far).

We had our work cut out for us, as it was now time to prepare each of the boxes, and load them with colored tissue paper, and cupcakes. 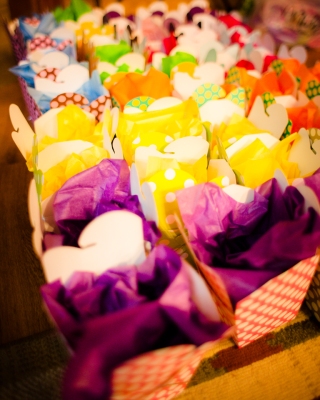 I had to stop occasionally to take a few pictures of our progress. 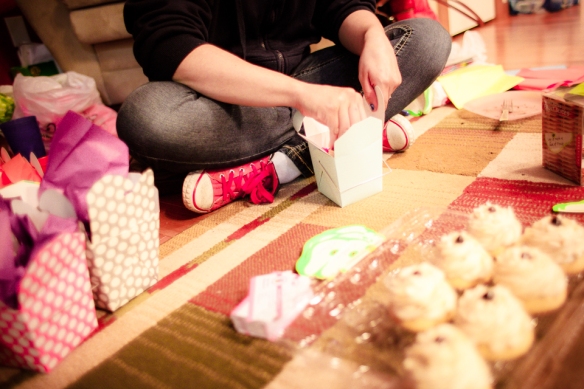 We originally ordered only 4 flavors, but had to add another, as there were more and more people that she needed to include.

The cupcake flavors were:

We were in such a hurry, I was only able to get lame snapshots of the cupcakes.
I’ll get better pictures later on. 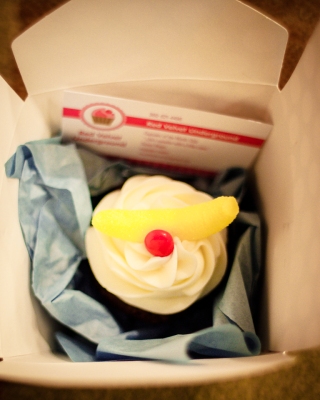 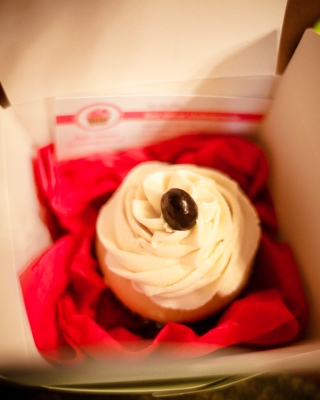 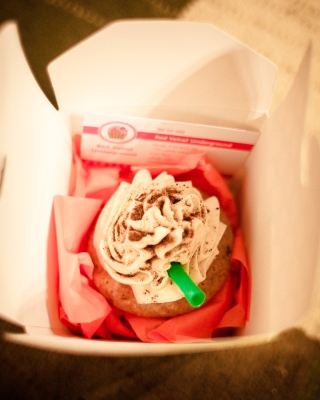 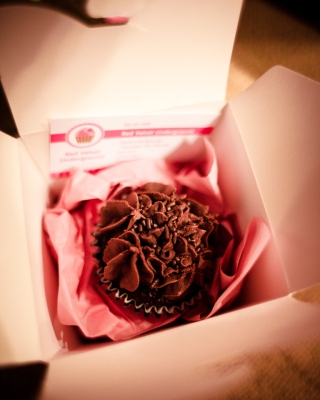 We inserted one of Susan’s cards on the inside of each box, and another on the outside as well.  After boxing up all of the cupcakes, we added our ‘impromptu cards’ to the outside.

Lots of boxes, cards, and cupcakes.  Enough to feed a small army! 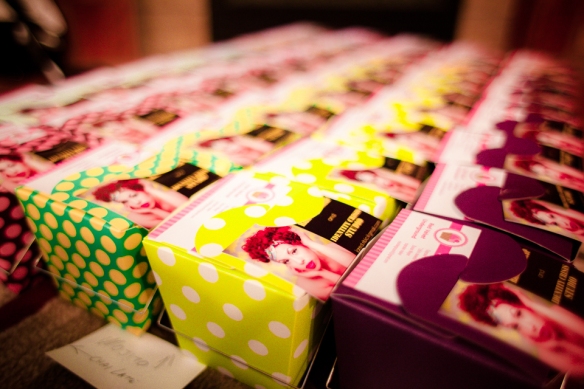 As ‘mass produced’ as it might seem, there’s even more involved… 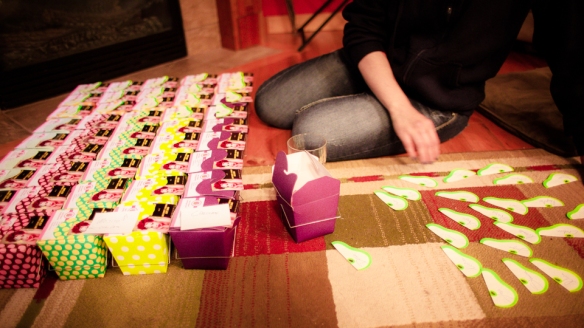 Each cupcake box also had its own nametag. 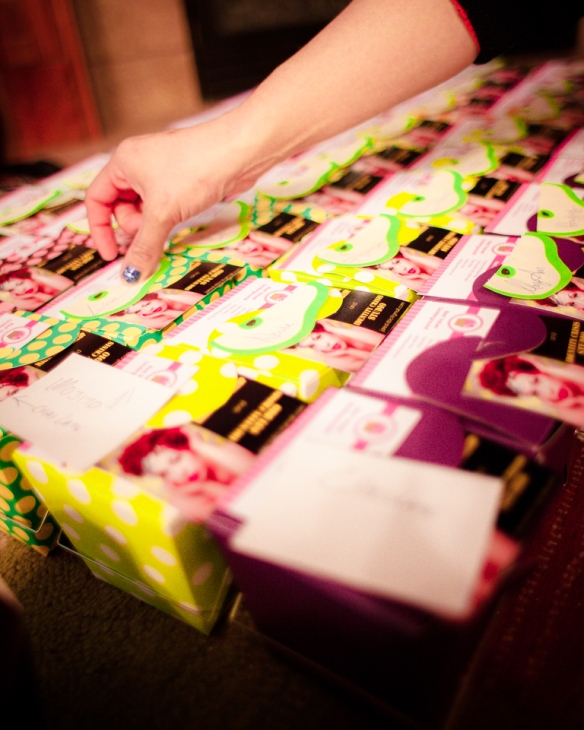 Just when I thought we were all done, she had to add a bow to each box, too! 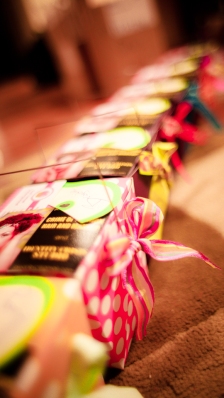 There was no way we could fit them all into our refrigerator, but it was cool enough to leave them out overnight.  I hid the sunflower cupcakes in a bag in the refrigerator, so she wouldn’t notice!

We were up way too late, and had to get up earlier than normal the next morning to get the kids ready to come along with us.  Running late (which is becoming our new favorite thing to do), meant we didn’t have time for breakfast.

I helped “Memphis” bring in the huge box of tiny boxes, and put most of them in the staff refrigerator.  Many others were handed out before she had to start school.

With my hands full, I wasn’t able to get any pictures of the reactions as each person received their cupcake.  I wish Susan could have been there to see it, and to hear comments like “This cupcake is so cute, I almost don’t want to eat it!”

Time ran out quickly, and I had to leave so she could get to her final 3 hours of class.
The kids and I went downtown quickly (Express Lanes were open) to Pike Place Market to get her some flowers. 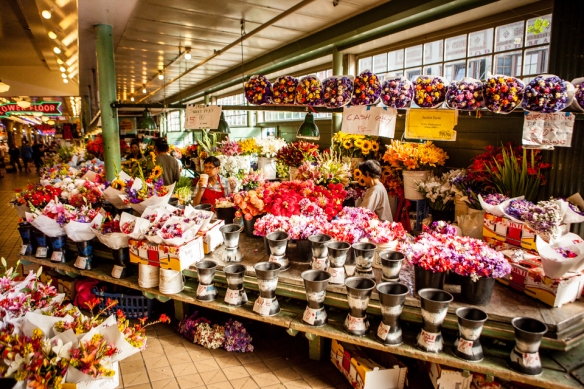 They didn’t have any bouquets of only sunflowers, so we had one made for her.

The kids and I grabbed something to eat, then headed back to the Gene Juarez Academy.

After 11 am, she was technically completed, but had some additional paperwork to take care of.  Then we passed out the rest of the cupcakes to those who were there that day, and they were a big hit!

This is her ‘graduation’ in terms of completing her requirements and hours.

There will be a ‘formal ceremony’ two weeks later, but this is what they do for each student as they complete their course at the academy.

Everyone comes up front to congratulate the graduate..

They announce it over the intercom system for all to hear.

This is right after I surprised her with the sunflowers. 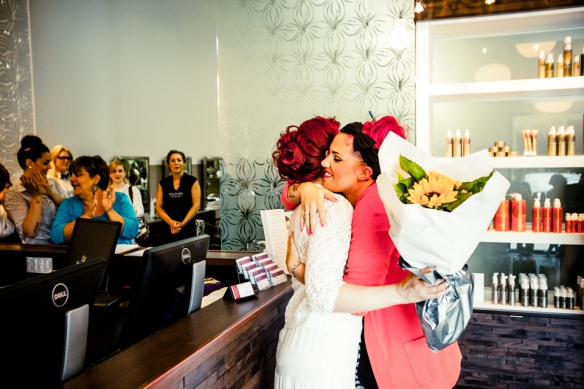 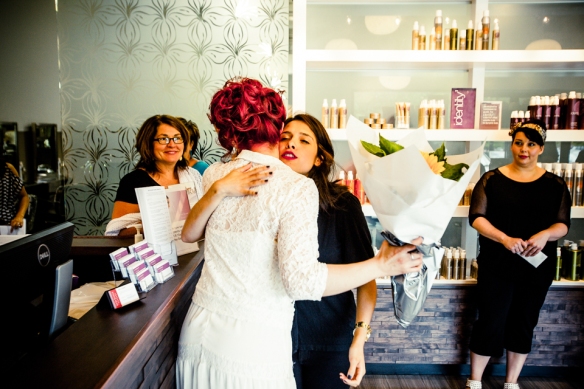 I missed getting a picture of her face when I surprised her with the sunflower cupcakes, but here are pictures of the octopus surprise:

If it wasn’t already obvious: I love making my girl cry!

I really wanted to frame the octopus print, but there wasn’t enough time.
We can’t wait to frame and hang it!

A few more photos before we left:

Talking with a fellow student who recently graduated. 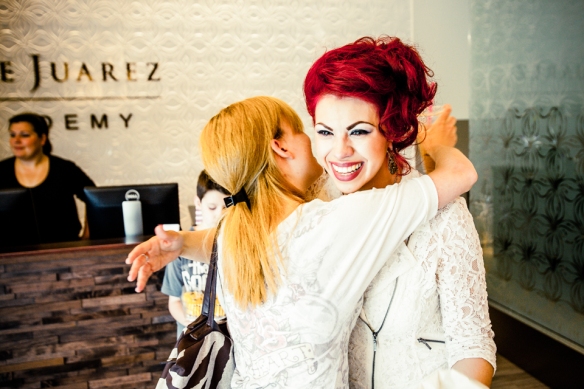 With the assistant campus director

We took the kids to the Pacific Science Center, tripped out to the Michael Jackson Laser Show, and saw lots of cool stuff.  This post is already getting really long, so we’ll save that adventure for another day.

After the Science Center, we took the kids to the Rainforest Cafe.

Jenny had never been to the Rainforest Cafe, so we had to get a Volcano for dessert.
The kids didn’t seem to mind.

In the end, I found out that she did notice the yellow cupcakes, and figured I was up to something!  But she had no idea about the octopus print!

We spent the next day being completely lazy (and typing this up in between naps).

With all of that out of the way, I guess it’s time to order more business cards.

My love, I simply cannot imagine what I would do without you in my life.
I am not the greatest poet, but I hope that I can at least share a fraction of what I feel for you with this.

“That beautiful smile-
The shape of your lips and the twinkle on your eyes,
Is far better than the perfect sunrise.

Your hand tenderly caressing my check,
I stop and cannot speak
This crazy sensation overtakes me makes my knees go weak.

That sweet whisper in my ear
Oh, the many tender words I hear,
My heart flutters inside and it brings me to tears.

How can it be? A fabrication, a dream or my mind’s delusion?
Forever in his arms, I succumb to his spell and permeate with elation

His intoxicating love invades the very depths of my soul,
Our body’s dance, intertwine, our boundless love knows not of control.

Kiss me. Make my drunk from those exquisite lips,
Being beside you, how could I ever resist?
I’ll cherish you forever, my sweets, my love, mi amor
‘Til the sun, moon and stars fade and are no more…”

How could I put into words what you mean to me?
No song, love letter or poem would ever describe just how much I love you, my sweets!

It’s hard to believe it has already been two months (on Groundhog Day).

Had I planned things more carefully, I would have waited to give Jenny this groundhog card in February.  Instead, I already gave it to her in January.  Since I completely botched the timing for Groundhog Day (that’s OK, we’re not superstitious), I had to come up with something more clever. 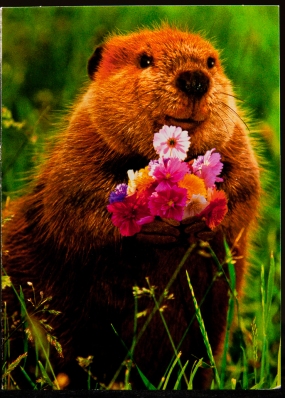 No, I’m not going to let you read the inside of this card!  Scroll down for the real card.

The idea came a to me too late, and I didn’t have much time to work with.  But it was worth trying anyway.  Jenny’s necklace had already been ordered, and I wanted a good card to go with it.  I was looking at a dead keyboard, I remembered a picture a friend recently sent me, where keyboard keys were removed to spell words.

From that moment on, I was on a mission.  For a couple days, I gathered all the dead keyboards I could find (even made a trip to Goodwill).  I was going to make my own anniversary card, and find a way to make it work with the necklace.  It’s not just about the gift, it’s the presentation!

Putting it all together (the day before I gave it to her) took considerably longer than I expected.